I’ve successfully hit the point on campus where local students know my name. Walking to class this morning someone yelled my full name, not Maddie, not MadMay… Madeline. It was a relief that someone didn’t assume my name was Maddie. Although, I’m sure it’s not hard to identify who I am when I’m the only blondie with a bright tangerine backpack walking around. Plus, everyone has added me on Instagram and probably thinks I’m some American Princess with all of my Miss America involvement. I currently have 53 message requests in my Insta DM’s from random guys saying “it is my fantasy to date American.. I would be so grateful,” “I wanna be a good buddy, bffs types,” “you look quintessential!” WHAT DO YOU PEOPLE WANT FROM ME?? These dudes are ruthless.

On Tuesday, we walked back to the small village off campus to get water and see some babies. Unfortunately, we only saw one baby who was drooling his face off, but we did get to be there for all of the children getting off the bus. Very young students hopped off the bus, waved at us, and still had to hitchhike home via motorbike, car, rickshaw… I can’t imagine an 8-year-old getting a ride from a stranger in my own safe neighborhood back home. Others were stacked high on the tops of trucks and packed in tuk tuks. I felt like the caste system was strong amongst the kids because the ones riding real school busses had nice, clean uniforms on. Others on the trucks were still dressed and clean, but not in uniforms. Education is really the only way to break the cycle of poverty in India so even the poorest families put their best resources into properly dressing their children for school. From a young age, kids take school very seriously, grab their siblings hands, and get to school by any means possible. 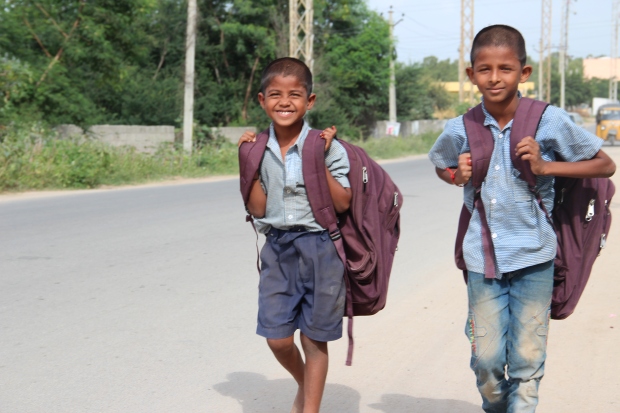 Even for us in India, it’s a toss up if our students will be in class, mostly because everyone has been some form of sick. On our first day in the dorms, we found out how watered down the soap was and I said “welp. Forget malaria. We are all going to get sick from each other.” At that point I realized I’m a little germaphobic like my mother, so I bought some real soap for our bathroom but it was too late. I’ve had a cold for two weeks and have been blowing my nose at every holy site in India. People probably think I’m so touched by the Gods, but really I was touched by Hannah’s germs in our first week.

Regardless of my cold, I’ve been getting some serious exercise in. I played volleyball for the first time in a while with some of our ladies and about 15 Indian men jumped in with us. I got competitive, I’m so sore, and I think I yelled my lungs off. The local dogs also enjoy the volleyball courts and like to pee on the poles while we play. At the end, we took a group picture and we wanted them to do the Ball State Chirp Chirp (it looks like an OK sign) but they laughed at us and said it means butthole in India. Even with that embarrassment we had a blast. One of the guys asked me “what do you like to eat? I want to eat that. So much energy.”

The next day, Hannah wanted to go climb rocks while everyone else went to a market. Hannah is one of my favorite people on planet Earth so I decided to accompany her (as if I was about to enjoy exercise??) We were looking for a particular rock called Mushroom Rock. Having no idea where this rock was at, I decided to stop and get stamps at the post office while we came up with a plan. There was a new master’s student from Delhi in the office who heard we wanted to go to Mushroom Rock, too, and that he could show us where it was. I confirmed with him that he wasn’t trying to kidnap us and we started our trek to the rock. Had I known what the next 3.5 hours would be like, I probably would have never gone to the post office.

17,000 steps & 6.2 miles later, we made it to mushroom rock. I will admit, it was a cool rock. Would I go again? Absolutely not. The neatest part is that there were peacocks everywhere. We had a perfect view of the other large rocks that the peacocks perched on. They make this funny little noise that sounds like cats meowing. At the point of being on this sketchy rock, I was dirty, sweaty, and ready to get a snack (we had fed our only snacks to some cute puppies on the way.) Then, it started pouring. We walked 45 minutes through the downpour to get back in time for dinner. I was soaked through to my underwear and my shoes were filled with sand. I got straight into the shower with all of my clothes on because there was no way I was going to be able to peel them off in my room without rocks going everywhere.

That same night we went back to Heart Cup Coffee for a little karaoke. Holy Moses. Indian people take karaoke very seriously. If there is such a thing as professional karaoke, they do it and they do it to American songs I would have never guessed. “We Didn’t Start the Fire” was probably the biggest hit of the night. Then…one of our girls decided she would step up, unbeknownst to us. She had had a few drinks on ladies night and was fired up to go (I had chocolate lava cake because I miss thick sweets more than I enjoy alcohol. Plus chocolate cake in a restaurant is only 90 rupees- $1.50.) It was less than optimal and everyone was kind of frowning at us, because obviously the white people were all together. I had originally wanted to karaoke but after seeing their seriousness, I thought I better not. But, being the one to always say yes to everything, I stepped up to the plate.

Since I have been getting lots of messages from Indian men and asked for selfies all the time, I felt the obvious karaoke choice for myself was “Dear Future Husband” by Meghan Trainor. I told myself if I was going to do this, I was going to ham it up. And oh boy, did I ever. Nobody else had been using the stage to sing on (weird, right?). So I took the mic, and serenaded the crap out of the Indian men. By the time I was done, girls were hugging me all the way back to my seat and hi-fiving me. I had officially redeemed us. It was liberating. The lesson remains: I did not regret the time I said yes.

Friday afternoon we headed to a small temple in Hyderbad. I still had 3 unworn sarees left, but our Indian mommy had already left us for the remainder of our trip so I didn’t know how I was going to get in to it. I was determined to wear one on our last days. We tried to YouTube how to wrap it but I will never do it as well as the locals. How do I know this? Because as we were doing laps in the temple, an Indian woman grabbed me and pulled me into a closet. She then pulled off my whole saree. At this point, I was losing my marbles thinking “omg this stranger just pulled off my clothes in a closet and nobody knows where I am.” She had a big smile on her face and said “you are looking so nice, but let me re-wrap you.”

After about 8 minutes, she had me pinned up and ready to go. Hannah poked her head in the closet and I was so relieved that someone knew where I was. With my goodies all intact, I thanked the woman and hobbled out of the closet, right into the arms of 6 more women who wanted to play with their living American doll. Once again, this time in public and not 5 minutes after I had been freshly draped, the saree was back off. These local ladies were having a blast. The eldest one was definitely given seniority to do the handling and she truly did a fabulous job. It was comfortable and pleated so perfectly.

This whole trip I have been waiting for my chance to get a picture with a beautiful Indian baby. At some point in the temple, a man held up his phone to me for a picture, but handed me his child at the same time. This little Maharaja matched my saree perfectly, he was the most beautiful child in all of India, and I was freaking out. If I had the option of taking him home, I really would have considered. My trip was complete in that moment and I was at peace with going home.

I say that as I am sitting on a bench in our courtyard on my last day. I successfully hit the point on campus where students in Hyderabad know me by my name. The local village people light up when we visit their shops. I will have to leave my great new friends soon and start life over in Florida in less than a week.

Everyone told me that India was the armpit of the world, and they weren’t necessarily wrong, but that’s the novelty of it. They have different priorities. They love more. They aren’t frivolous. It’s a place that makes you think of all the real bullshit in your own homeland. Go abroad and your heart will be pulled in every direction.

XOXO
Leaving my love in India,
Madeline May

We are a participant in the Amazon Services LLC Associates Program, an affiliate advertising program designed to provide a means for us to earn fees by linking to Amazon.com and affiliated sites.