Jerusalem might be a large melting pot of worldwide religions, but Judaism does stand out as the majority, making up 76% of the population. Therefore, even visitors who aren’t Jewish may find themselves learning about Judaism, trying some challah bread, or visiting one of the best Holocaust museums in the world. The Yad Vashem was built in 2005 as Israel’s largest Holocaust memorial, but started as a group documenting the memory of victims in 1953. In 2019, it was ranked by TripAdvisor as the 24th best museum in the world.

For somebody who is not Jewish, I have chased Holocaust history pretty heavily in my life. I have toured the United States Holocaust Memorial Museum in Washington, D.C., seen the Holokauszt Memorial Center and shoes on the Danube River in Budapest, spent a grief-filled day in Auschwitz-Birkenau and the Kraków ghettos, and now the Yad Vashem in Israel. These are important places to see in our recent history, and I would recommend them to any religious or non-religious person. These events have been heavily documented and displayed by survivors for a reason.

Each of these memorials have a unique reason to visit. What stands out immediately at Yad Vashem, compared to many similar museums, is the number of Jewish people visiting. This might sound obvious given the population of the city and the deep connection to Israel, but on no other Holocaust visit have I been with such religious people standing in front of the near demise of their entire religion. It was almost as eerie to watch a Hasidic Jew view tattered striped pajamas as it was to see the artifacts themselves.

Two visitors view the landscape of Jerusalem from the overlook point at Yad Vashem.

This museum is also ghetto heavy on the front end, which tends to be the topic overshadowed by basic history lessons that focus on concentration camps, but is no less horrifying. There were things I learned about Jewish ghettos at this museum that I didn’t learn in an actual ghetto in Kraków. This was a signifiant part of the Holocaust history that was strewn across many countries in Europe and the museum does a great job organizing the stories of ghettos in many different cities.

The most touching part of the museum is the number of personal testimonies. We spent 2.5 hours floating through the museum, but could have spent all day reading every sign and journal. The museum is free, but I would recommend doing the audio tour for 30 ILS (about $9 USD.) The crowds do come in the afternoon, so get there earlier for some peace while visiting. 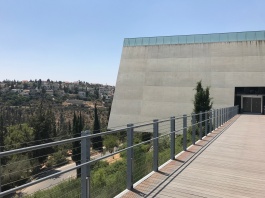 The front walkway into the main section of the memorial.

The entryway to Yad Vashem starts with a film portraying life for the Jews prior to WWII. 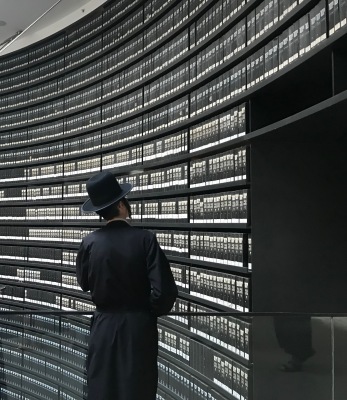 A Jewish man views the room of names at Yad Vashem.

We are a participant in the Amazon Services LLC Associates Program, an affiliate advertising program designed to provide a means for us to earn fees by linking to Amazon.com and affiliated sites.